Brooklyn 99 is a really great show. It’s funny, heartfelt, and has a great cast of characters. It’s also incredibly progressive. I would consider it a perfect model for anyone wanting to write a modern story that shows what our society could be.

Stereotypes are blown out of the water on this show. The women detectives are just as tough as the men. The gay captain is the most stoic, non-frilly stick up his ass character I’ve ever seen. The sergeant is a hugely massive man who had to be taken out of the field after his daughters were born because he feared dying and leaving them alone. They’re all real people. They all behave as you’d expect a real person to behave. 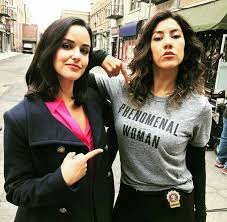 With the diverse cast, the show obviously sometimes deals with moral issues that we face. In one episode, the Sargent (played by the amazing Terry Crews) is harassed by a uniformed officer from another precinct, because he’s out walking in the streets of his neighborhood at night. In another episode, Detective Diaz comes out as bisexual to her parents. Captain Holt occasionally brings up the fact that as a black gay man he had to fight to be accepted. These are things that I can’t believe we’re still dealing with in 2018! But since we are still dealing with them, I’m glad to see them dealt with in such great ways.

Brooklyn 99 is a comedy. That’s its main goal. And all of the characters are genuinely funny. Gina’s strange, self-centered outlook that somehow manages to manifest in introspection is hilarious. Detective

Santiago’s constant type A actions and her adoration of Captain Holt is usually good for a self-deprecating laugh on my part. And really, anything Boyle does is so sad sack wonderful.

We inherently like people who make us laugh, simple as that. The most popular characters in anything are rarely the straight-laced, big muscled hero who saves the day. They’re usually the Xanders, the Chandlers. They’re the funny ones.

Jake Peralta, one of the main characters, has several repeated phrases. The most popular is probably, “Sure, sure, sure. Cool, cool, cool.” Repeated quickly, and usually with his typical eight years old who just got a pack of pokemon cards grin.

In the episode where Jake is sent to jail for a crime he didn’t commit, he repeats that phrase, “Cool, cool, co-co-cool,” when he hears the verdict. It’s something that he’s said a thousand times, and always with a smile. But at that moment, he looked so afraid, so broken. He obviously didn’t think that this would ever really happen to him. You can see his heartbreak. And that wouldn’t have worked as well if that line hadn’t been so ingrained in the character.

Love is always a great story

The love story between Amy and Jake is a great one. Never once does it feel forced. Never does it become the whole focus of the show. Always is it sweet and endearing? They are strong people on their own and have a healthy relationship together. It’s nice to see an honest, healthy relationship on tv. There’s not enough of that.

But friendship is a better one

Jake and Amy’s love story is great. But even better than that is Jake’s friendship with Gina, who he’s been friends with since they were kids. Or his friendship with Rosa, that began at the police academy. Or his strange friendship with Boyle, who is nearly obsessed with him. The friendships on this show are so real. They’re so real, so wonderfully honest. I love seeing men and women be friends without anything else. I have a lot of male friends, and I know that I sometimes get some backlash from that. People make assumptions when guys and girls are friends. I hate that. It’s good to see more men and women being friends on tv.

In the show, several of the characters have gone through life-changing situations. Terry has three children, and it makes him more cautious. Jake is arrested and put in prison for nine months, and it makes him rethink his whole life. It makes him, in the end, a better detective.

It’s wonderful to see the characters change in this way.

If you’re an author, you could do worse than learn the lessons Brooklyn 99 has to teach.