Every time I do one of these posts, I end up adding twenty books to my Goodreads page. Oh well, worse problems to have I guess.

I did a series of posts a few months back about Science Fiction subgenres. It was fairly popular, and I had a good time writing it. I learned a lot, got some great story ideas, and found out about books I really really want to read.

So I decided to do it again, this time with Fantasy sub-genres. Once again, all of my research was done on a website called Worlds Without End. Go check them out.

I read this description, and like seventeen story ideas just popped into my head. I want to do a whole novella series about the war of the roses, but with magic. (Yeah, like Woven isn’t already that.)

Alternate History is a Fantasy subgenre where you take a historical instance, and re-imagine what it would be like with magic. How amazing is that? I cannot wait to start writing some of these.

Some examples of Alternate History Fantasy books are Wild Cards, an anthology series edited by George RR Martin and Melinda M. Snodgrass, His Majesty’s Dragon by Naomi Novik and The Moon and Sun, by Vonda N. McIntyre.

Fantasy tends to be very serious. Comic fantasy, not so much. It’s all about a lighter and much funnier look at dragons and magic. I wish I could write this, but I’m only funny in small doses. I’ve got a tight five stand up routine at best.

Some great examples of Comic fantasy books are The Lust Lizard of Melancholy Cove by Christopher Moore, Abraham Lincoln, Vampire Hunter by Seth Grahame-Smith, and of course literally everything Terry Pratchett has ever written.

This is a sub-genre I’ll be dealing with eventually. (I have a fourteen book plan for the Woven universe. The last one will be a contemporary fantasy book.)

A contemporary fantasy book is one that takes place in modern times, with magic built into the corners of our world, going largely unnoticed by the rest of the world. I think people love this one because there’s not enough magic in the real world. There are plenty of monsters, but not near enough heroes.

Probably the most popular example of Contemporary Fantasy is the Harry Potter series by JK Rowling. Another few examples are Spiderwick Chronicles by Tony DiTerlizzi and Holly Black and Neverwhere by Neil Gaiman.

I would consider my upcoming series, The Coinkeeper Chronicles, a dark fantasy. Dark fantasy stories deal with horrifying monsters, in a fantasy setting. And they are really fun to write, by the way. You’d think that a werewolf wouldn’t be so threatening when you have magic on your side. But then you’ve got demons and haunted insane asylums. Magic can only do so much about those.

Some examples of Dark Fantasy books are Coraline by Neil Gaiman, The Dark Tower series by Stephen King, and the Miss Peregrin’s series by Ransom Riggs.

That’s it for part one. Check out Friday’s post for part two.

Have you read any of these books? What’s your favorite fantasy sub-genre? Let us know in the comments below.

In Devon’s world, magical work is as common as turning a pot or fletching an arrow. 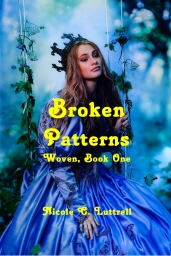 What isn’t common is a man with thread magic. When Devon finds that he is a seer, weaving prophetic tapestries, his family tries to keep it a secret.

But the family can’t hide Devon’s visions after he predicts a devastating plague in the dragon lands of Coveline. He travels there to help the dragon queen save her people.

Meanwhile, Devon’s sister Lenore joins the Church of Singular Light. As Lenore learns to serve, and falls in love with her city, she discovers a dark underbelly to the church.

Lenore fights for her city, and Devon rushes to find a cure to the plague, while an unseen enemy raises an army to destroy Septa from within.

Get it on Amazon or Smashwords