It’s no secret to any of you that I love music. It’s a form of creativity that I’ve never really invested enough time in for my own happiness. Though I don’t really think there is enough time for that.

I’ve always said that art feeds art. Music and writing, in my opinion, are the best companions. You want to keep in mind that song writers are writers. Like the rest of us, they often create art about their art. About the process and the emotions that come from being a writer, an entertainer, a story teller.

Other times song inspire everyone, anyone, to be their very best. I’ve spent a lot of time creating a playlist on YouTube of both sort of songs for when I’m having trouble writing. These aren’t great for mood setting, or for while I’m actually writing. But this is the best morning playlist for a writer that I could make. Some are old, some are new. They span genres because I listen to a little bit of everything. But I defy anyone to listen to these songs and not want to be the best version of themselves.

Hall of Fame, The Script

On Top of The World, Imagine Dragons

Rabbit Run, Eminem (Do I need to give you an adult content warning here? Or do we just assume that?)

‘Till The River Runs Dry, by Garth Brooks

What’s your favorite inspirational song? Let us know in the comments below.

Devon and Lenore live in a world where magic is as common as turning a pot or fletching an arrow. To men, magic manifests in physical arts like sword play, archery and martial arts. Women use magic with thread and yarn. 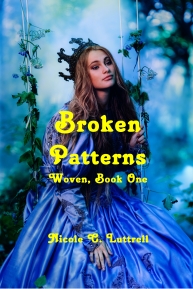 Until Devon. Weeks after his Uncle, King Issac of Septa, is killed by a rebel from the neighboring country of Montelair named Calvin Olendae, Devon finds that he can weave visions of the future. His father, who has just inherited the throne, insists that he keep this magic a secret. He has made a promise to king Omar of Calistar, that Devon will marry his daughter, Sultiana. But when Devon sees a plague in a neighboring country called Coveline, the family has no choice but to reveal the truth.