I don’t feel like enough people are talking about this show. That’s a shame because it’s a tightly written story. We marathoned both seasons within three days because of course, we did. But if you’re looking for something else to watch while you’re stuck inside, you should consider this. Here’s why it works.

Let’s start with that theme song. I’m a sucker for a good theme song, and this is a great 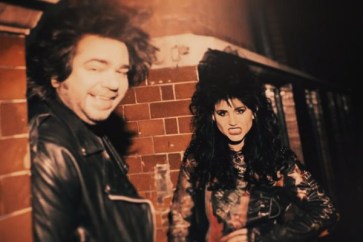 one. I never skip it, I always let it play. The song is good, but so is the imagery. Pictures and paintings of the main characters through the ages are funny. More importantly, though, it gives a feel of who the characters are. That’s something we’ve come away from in recent years. But as this show is character-driven, it makes sense that the theme song gives such a good feel of the characters.

The show is about vampires, of course. And while they do show the vampires as hunters and killers, they lean heavily into the sexual aspect of the vampire myth. But not in a sexy way. Oh no, this is hilarious. Like Lazlo’s vagina topiary. This wouldn’t have been half so funny if he wasn’t so damn proud of it! Or the way Nadjia talks about her lover. She thinks it’s very dark and romantic. It comes off as silly, but in the best possible way.

Which brings me neatly to the next reason why What We Do in the Shadows works. It’s funny! At no point does this show take itself seriously. The characters think a lot about themselves, but they’re ridiculous. They’re silly and selfish and they always think they’re entirely right.

Take, for instance, Colin Robinson. He’s an energy vampire. He’s a Daywalker, and he can feed off other vampires. All the other vampires in the house are scared of him. This sounds like a really tough, badass character.

Until you realize that he talks his victims to death. And that he has an office job because that’s his feeding ground. And he wears bland clothes and glasses. He’s a really funny character.

What We Do in the Shadows is a mockumentary. But unlike many of the other popular ones, it feels like it could be. The camera crew is attacked a few times. They never show up anywhere you wouldn’t expect a crew to be. At least one time a camera guy is locked in a well with the vampires, about to witness their fiery, sunny deaths. And I swear you can see the camera shaking. I’m highly amused that the least realistic mockumentary show has the most realistic camera crew.

From a visual perspective, the show does a great job of portraying the feel of an old, gothic mansion. Everything is dark wood paneling, red drapes. It’s all very heavy. The shadows stretch in just the right angles. Every scene is very dark, but also colorful.

Unless we’re at Colin Robin’s office. Then the tan and gray are even more striking by contrast.

Finally, let’s talk about my favorite part of the show.

Guillermo is Nandor’s familiar. He wants to be a vampire. But as the series progresses,

we start to realize one thing about him; he’s going to crack hard. We can start to see this in the very first episode when Nandor forgets their anniversary. We also find out later that Guillermo is related to Van Helsing. There is vampire hunting in his bones. This becomes apparent when he starts accidentally killing vampires. All of this becomes a good thing for Nandor and the other vampires after they accidentally invoke the wrath of the vampire council. Slowly, as the series progresses, Guillermo becomes filled with rage and kind of becomes a badass. The last episode, which I loved, includes him wiping out an entire theater of vampires to save our main characters. And then, standing atop two theater chairs, he says, “My name is Guillermo De la Cruz.”

Because the vampires he’s defended for two seasons don’t even know his last name.

If you haven’t seen What We Do in the Shadows, I can’t recommend enough that you watch it. And if you have watched it, leave a comment below. I want to know what you thought of it.