Spoiler warning for Strange the Dreamer!

Some of my favorite characters in fantasy and science fiction are the ones that appear human. Characters that you might pass on the street without another thought. The ones that look just like all the other people. But they’re not.

For this list, I’ve included eight of my favorite not human characters from tv and books. It’s weird, I don’t think I’ve written a single character like this. Guess I’ll have to fix.

Monroe is a blutbad (think werewolf). But he would hate to be pigeonholed into that. He’s also a 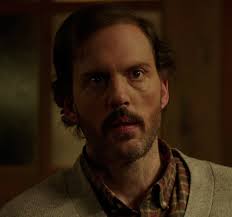 clockmaker, a historian, and a great guy all around. He’s also vegetarian because he’s decided he doesn’t want to be a hunter and killer anymore.

I love that about him. Not because I have any trouble with eating meat. I really love meat, actually. But it’s part of what makes Monroe a perfect blend of modern and traditional. He’s his own whole person and being a blutbad is just part of the bigger picture.

That isn’t to say that his character doesn’t evolve and change as the book goes on. He falls in love with the main character, Virginia, and wants to be a better person because of that. Through the course of the story, they find instead that they’re compromising on what a better person looks like for both of them.

If I just went a little into new age philosophy, that wasn’t by accident. At some point early in the book, Wolf meets a psychologist, who recommends a series of books to help him. He proceeds to cart an armful of self-help books through the nine kingdoms while on their quests.

The entire Other cast from Coraline

I love how these characters could have been just props. But it’s just not Gaiman’s style to do anything by halves. So the Other characters are mirrors of their real-world examples, but better. They all seem to be exactly what a little girl Coraline’s age would want; completely focused on her. That age is a selfish age, no judgments.

Later, the Others become mirrors of their real-world examples, but worse. So, so much worse. They become what we warn children strangers might become, monsters bent on hurting little children.

The True Knot from Doctor Sleep

Much like the Other’s from Coraline, the True Knot preys on children. That’s enough to put them at the top of a nightmare list. But the really scary thing about them, that is made clear through the book, is that you could walk right past these people, and probably have, and never know they were there.

They look like RV people. Boring people, retirees, and free spirits. People wouldn’t look at twice. Unless you happen to be a child with the shining. Then you’ll see more of them than you want.

Lazlo from Strange the Dreamer

I have to admit, I kind of didn’t see this ending coming. I just figured he was from Weep and didn’t remember. But it goes so much deeper than that.

I love that he was just this amazing, mythical figure, and he didn’t know it. He’s just going about his business, as a librarian in love with Weep, until he meets Sarai.

I love that even though he has the physical build of a bruiser, he’s a sensitive and genuinely kind man. I love that the other characters are just baffled that he helps people without expecting anything in return.

The Doctor from Doctor Who

Another great character, who is great because of his goodness. The Doctor doesn’t carry a gun, he carries a screwdriver to fix instead of destroying. He has two hearts, and it shows, in the genuine care he feels for every single creature in the universe. He will live forever, and he feels the honest and painful weight of that.

But he never, no matter how much it hurts, stops caring about people. Can you imagine the weight of that? How many people he’s lost, how many worlds he’s seen the end of. And he keeps seeking out companions, keeps seeking out love. Even though he knows how it will end, he keeps on loving.

I was a kid the first time I saw Angel, and I had no experience with a main freaking character being just

killed off in the first season. So, when Doyle died (The good fight, yeah?) I wept. Literally, my eyes stung when I typed that.

Doyle was half demon, half human. Most of the time he looked like a normal person, and he acted like he was running from something dark in his past. We don’t really ever find out what darkness he was running from, but it’s there.

Doyle is funny. He’s a screwup, and he’s not much of a fighter at first. But he has a calling, to help Angel save people, and he commits himself to that. He becomes brave, and he gives his life to save people who would likely kill him if they knew who he was. There’s a nobility there, and I don’t know many people equal to it. (Side note, characters like him are why I love Joss Whedon so very, very much.)

So that’s it. What do you think? Did I miss a character you think should have been on the list? Let us know in the comments below.