Today on the Spring Author Interview series, we have Cynthia Ley, author of It’s A Mystery! Please enjoy.

TELL US ABOUT YOUR BOOK.

My latest book is the second in the cozy series It’s A Mystery II: A Player Sets The Stage. The first story, “It’s A Mystery I: The Lost Boys,” debuted in my quirky and offbeat short story anthology Pink Flamingos & Other Follies, published last year.

IT’S A MYSTERY I: THE LOST BOYS

Debuting the series in the story anthology Pink Flamingos & Other Follies.

Tim and Jocelyn are two college friends with the same obsessions –books and theater. They find a lovely little town to set up It’s A Mystery, their bookshop, and both become active in the community theater group.

Then one fine summer day, two little boys go missing, one of them being the son of Joc’s best friend. There is no trace of them anywhere. And then a clue is left in the bookshop’s dropbox as rehearsals for the upcoming theater production swirl around them.

We were stunned. Tim pushed back from the manuscript, met my eyes.

“My God, Tim, did someone disappear Johnny and Bobby?” My voice expressed only a fraction of the horror I felt.

“It sounds like it,” he said grimly, pulling out his cell. “Hello, Steven? Something showed up here in our drop box. It might be important. But it makes very little sense.”

Someone who hates boys. A wonderland somewhere nine inches down. Some place that’s dark and below. Below what? A lot of walking in the dark. A challenge. Lots of contempt. Marco Polo, where’d they go?

Had we just read a confession?

IT’S A MYSTERY II: A PLAYER SETS THE STAGE, continuing the story begun in IT’S A 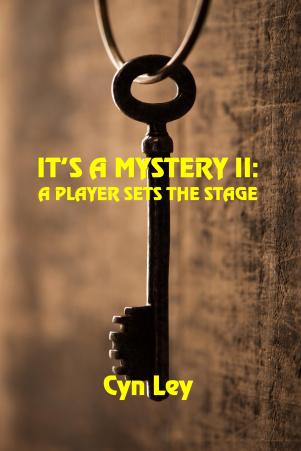 MYSTERY I: THE LOST BOYS from the anthology Pink Flamingos & Other Follies.

It’s now a few weeks since the events of THE LOST BOYS. The play is almost ready to debut. Tim and Joc find themselves at center stage for some fallout from recent events and from their college days. Meanwhile, at the community theater, there are some bizarre and dangerous discoveries. The stage is set … but for what?

Randy never took the hint. He’d try to engage me in small talk, and I wouldn’t let him. Eventually, he’d say something like, “Hey, you want to go out to dinner with me?”

“You like playing hard to get, don’t you?” He’d flex his chest and arm muscles, putting on some sort of fuzzy testosterone-fueled display. It had all the appearance of tribbles in the throes of an epileptic seizure. “Whaddya think?”

“Lots of ladies would love to get what you’re getting.”

“Fine. Go bother them.” I tried to sound neutral and calm, I swear I did. “Starting with your girlfriend.”

I knew it. The feud wasn’t over yet. Only this time I was the prize. I just had no plans on becoming collateral damage.

WHEN DID YOU KNOW YOU WERE A WRITER?

Young, pre-teens. Creative writing classes scared me out of writing fiction for the longest time. As a skittish introvert, the last thing I wanted to do was read my stories aloud in front of the class! (Why do teachers torture their students like that??) I had story PTSD and didn’t get over it until after I’d retired. I earned my Masters in History and Political Science and learned how to do research and concise, clean writing, which has served me well since.

DO YOU HAVE ANY BOOKS COMING OUT THIS YEAR?

It’s A Mystery II: A Player Sets The Stage was just released in May 2019. I have a few more stories up my sleeve and hope to release at least one of them before year’s end.

IF READERS ARE LOOKING TO CONNECT WITH YOU, WHAT’S THE BEST WAY TO DO IT?

WHAT ARE YOU WORKING ON RIGHT NOW?

A paranormal story (Cecily’s Vampire) and a murder mystery (Death By Drake). Both with lots of twists and turns.

TELL US ABOUT SUBMITTING YOUR BOOK. WHAT WAS THAT LIKE FOR YOU?

At that point, it’s been released to the Fates, and, win or lose, they still can’t take away my birthday.

WHAT AUTHOR INSPIRES YOU THE MOST?

I can’t answer that. But I have been blessed with some fabulous mentors along the way.

WHO IS YOUR CURRENT FAVORITE AUTHOR?

My favorite guilty pleasure is the Agent Pendergast series by Douglas Preston and Lincoln Child. They have such devious minds and know how to tell a fabulous story.

WHAT WAS YOUR FAVORITE BOOK AS A CHILD?

Ayn Rand’s The Fountainhead. I was 11 or so, and loved this tale of creative defiance in the face of societally enforced conformity.

WHAT ADVICE WOULD YOU GIVE YOURSELF IF YOU COULD GO BACK TO WHEN YOU FIRST STARTED WRITING?

Considering that was only a few years ago, I think the answer would be (and still is) to be more out there. I’m a terrible introvert, and find advertising myself is a bit scary sometimes.

WHAT WOULD YOU CONSIDER THE BEST THING YOU’VE EVER DONE FOR YOUR WRITING CAREER?

Still working on that. But I am doing a lot of shows right now. Joining a regional writers’ community has been very helpful (NIWA, the Northwest Independent Writers Association).

WHAT BOOK WOULD YOU SUGGEST TO ANYONE WHO WANTS TO WRITE?

Other than my own? (laughs) Seriously, I consider the story “Remains” from one of my earlier short story anthologies, The Ossuary Playground and Other Unexpected Tales, one of the best stories I have ever written, and it blew my reviewers out of the water. Just sayin.’

Going old school though, John Steinbeck’s The Grapes of Wrath. It is unparalleled for its truths, its integrity, and its sheer power of story. This is an author being true to his Voice.

As should we all. Readers can tell when authors aren’t invested in the stories they tell. It’s like having to write that science paper on igneous rocks when you’d much rather talk about the metaphysical properties of quartz.