Comic books are a bit of an obsession with me. My favorite is X-Men. I love Marvel for the characters and DC for the storylines.

All that being said, I am a little obsessed with anything superhero related. And, lucky me, there’s a lot of it.

I also have a twisted side. No surprise, I’m sure some of you have read my books. So as soon as I saw an ad for The Boys on Amazon Prime, I realized I was going to need to see it.

Now, let me first give you a warning. This is a gory, bloody show with a ton of adult 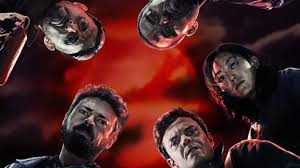 content. Not for little ones or those who are sensitive to such things. And the older I get, the more sensitive I get to such things. But this didn’t bother me too much at all. Well, the rather graphic sexual assault scene near the beginning is a bit much. Just as a fair warning.

The story is about Hughie Campbell, who is a completely normal person in a world with superheroes. He’s beloved girlfriend is killed when the superhero, A-Train, literally runs through her. He’s left holding only her hands. He soon falls in with our anti-hero, Billy Butcher. (Has there ever been a more comic book name than that?) They intend to make the superheroes pay for what they did to Hughie’s girlfriend. And, as we later discover, Billy’s wife.

I love the twisted hero motif. The heroes that we all admire have a dark side. They’re not just like you and me; they’re far worse. Power corrupts, we all know this. And these heroes are the perfect example.

A lot of the show revolves around the character’s relationships. One relationship that made my skin crawl was the one between Homelander and Madelyn Stillwell, an executive at Vought, the company that controls the supers. His weird obsession with her is cringy. He wants all her attention, he wants her to like him. He wants her to love him. He’s straight-up jealous of her relationship with her infant son.

This show reminded me a little bit of the Amazon version of The Tick. The same sort of setup, but with a far darker feel of course.

I loved the main character, Hughie, played by Jack Quaid. He’s capable without seeming like he falls into stupid luck. He’s endearing, without being sappy. He makes some decisions I’m not comfortable, especially when he starts to fall for a superhero named Starlight. But he is, overall a good person trying to remain good during a bad time.

Billy Butcher is the poster child for an anti-hero. He’s angry, bitter, hurting. He does not give a damn about the well being of anyone, literally anyone. He will do whatever it takes to get vengeance on Homelander for what he did to Billy’s wife.

While Billy and Hughie are trying to take down the superheroes, a bright young woman named Starlight joins the superheroes. She’s wanted this her whole life. But, of course, she soon finds out that the company wants to use her for her appearance. Her heroes are molesters, drug addicts and cynical. Kind of a snoozefest. It’s an old story.

What’s a less than old story is Starlight struggling with her faith, as she sees more of the

world and realized that the morals she was brought up with aren’t necessarily the ones she finds value in now. That was nice to see.

The most surprising thing about The Boys was the way characters developed. There was at least one character that I despised and wanted to die in a fire. By the end of the season, I felt so bad for them! It was a remarkable character development.

Overall, I’d say that The Boys is worth a watch.

Have you seen The Boys? What did you think of it? Let us know in the comments below.

In Devon’s world, magical work is as common as turning a pot or fletching an arrow. What

isn’t common is a man with thread magic. When Devon finds that he is a seer, weaving prophetic tapestries, his family tries to keep it a secret.
But the family can’t hide Devon’s visions after he predicts a devastating plague in the dragon lands of Coveline. He travels there to help the dragon queen save her people.
Meanwhile, Devon’s sister Lenore joins the Church of Singular Light. As Lenore learns to serve, and falls in love with her city, she discovers a dark underbelly to the church.
Lenore fights for her city, and Devon rushes to find a cure to the plague, while an unseen enemy raises an army to destroy Septa from within.