Spoiler alert! If you haven’t seen Stranger Things Season 3, click away now because I’m going to ruin it for you. You’ve been warned, don’t yell at me in the comments.

I’m late to this party, but it seems like it’s still raging so whatever.

After rebelling against it for years, because I’m secretly a hipster and despise anything 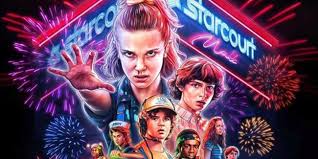 too popular, I finally sat down and watched all three seasons of Stranger Things. And I mean, I watched all three seasons in four days. Now, I’ve had this curse for years, that I’m usually able to predict most plot twists and endings long before they happen. I have been repeatedly punched while watching movies with friends for guessing the ending before the movie starts. I think it’s because I spend so much time reading and writing, nothing surprises me anymore.

At any rate, having marathoned all three seasons, I’m ready to give my predictions for the next season.

Prediction One, Will is going to snap crackle and pop.

Poor Will has been through a lot. He’s been trapped in the upside-down, coughed up a baby monster and had two of his best friends abandon him for girls.

Worse, his mom and brother have been being super overprotective. I don’t blame them if it was my kid he’d never be out of my sight again. But he’s going to crack right down the middle and do something cataclysmically stupid.

Prediction Two: El’s going to need her siblings to get her powers back.

I’d guess it’ll probably be Kali/Eight. But it might also be someone else. It would be a fun way to throw in a new character or guest star.

Prediction Three: Steve is still not going to get a girlfriend.

Not that he doesn’t really, really want one. That boy wants to be in love. But I think he’s going to figure out that that isn’t what he wants.

Prediction Four- El’s father is still alive. I am sure that he’s alive, and he’s probably still torturing little kids. I’m almost sure that she won’t be able to kill him, either. Not that she’s not capable. But that she emotionally can’t.

Prediction Five- Maybe this is wishful thinking, but I don’t think it is. I don’t think for one second that Hopper is dead. I think he’s the American that was alluded to in the stinger at the end of the last episode.

Again, maybe I just really want this to be true. but I’m okay with that, I still think I’m right.

When Season 4 comes out I’ll revisit this list and see how many predictions came true. In the meantime, what predictions do you have for Season 4? Let us know in the comments below.