American Horror Story is a cornerstone of my yearly tv watching. It’s a remarkable addition to the horror genre and a yearly test for the actors involved. In the interest of full disclosure, that’s where I’m coming from when writing this blog post.

Sorry, this review is so late. I want to say I wanted to watch episode two to get a better idea of the season before I wrote it. But that’s a filthy lie. It’s late because I don’t often have time to sit down and watch something to review it. Normally when I watch something, I’m doing other things. Posting on social media, cleaning the house, crocheting, just about anything else. When I watch to review, I watch. I take notes and analyze them. It takes time, Man! But anyway, here’s what I took away from the first episode. What follows are my criticisms, notes, questions, and predictions after watching Episode One and while watching Episode Two.

This episode focuses on a slasher flick style, with a group of people heading to a camp to be counselors for the summer, only to find that there was a gristly murder there fourteen years before and that the owner of the camp is, in fact, a survivor of the murder. She’s reopened the camp as a way to exorcise her fear, as the only one to survive the twisted Mr. Jingles.

Some thoughts on the slasher flick genre, and how 1984 lives up to it.

The episode starts with a three-way between camp counselors, in the same cabin where children were sleeping. While that’s awful and gross, it pairs perfectly with the slasher flick genre. I mean, there wasn’t a single Freddy Kruger movie that didn’t have at least one sex scene.

I am, however, thrilled that they didn’t keep the SD sepia tone throughout the whole show. That would have been a little much.

One big stylistic tone from slasher flicks is the music. It rings true with this show, for 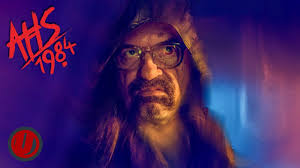 sure. The music reminds me deeply of the scores for Nightmare on Elm Street, and I love it. This is something that Stranger Things did well, too. I don’t wonder much if this season was inspired by the popularity of Stranger Things, because I think it totally was.

I have to say that I love that this has so far held to the three rules of a horror movie. If you haven’t seen Scream five thousand times as I have, let me give you a refresher.

If you want to survive a horror movie don’t have sex, don’t drink or do drugs. And, most importantly, don’t ever say ‘I’ll be right back’. Ever, dude.

Questions I have after watching this episode

I had a ton of questions after watching Episode One. Who is stalking Xavier? Why does that ring matter so much? How the hell does someone fill up a van with gas for only $10. Three of those questions were answered by the end of the episode.

How in the hell have none of these counselors never heard of the murders here before? Maybe some of these characters didn’t grow up around LA, but I imagine a few of them did. And even if they didn’t, wouldn’t this be nationwide news if a bunch of kids was murdered at a summer camp?

Also, why didn’t Ms. Booth introduce the counselors to Trevor earlier? When they arrived they were told they were the only counselors. Is this a plot hole, or is Trevor really there?

I also dearly want to know why Mr. Jingles is collecting keys. The first time we saw him it made sense to have keys because he worked there. But why did he take the janitor’s keys? Doesn’t he take ears as a trophy?

Problems I have with this episode

I don’t think that any of the kills from Mr. Jingles were remotely realistic so far. How did no one in the damn cabin wake up while he was killing them? Did no one scream? Were they all such heavy sleepers? And the death of the orderly at the insane asylum was a problem for me. Generally, a human man wouldn’t have the strength to hold himself up by his neck and also strangle someone to the point that blood came out of his victim’s eyes. While this does feed one of my predictions (see below) it’s a huge issue for me if I’m wrong.

Thoughts on AHS as a series

Let me first say that I love Billie Lourd so much. She is amazing every year. Now that that’s out of the way, let’s get to the rest of it.

Every year I’m astounded by the actors of AHS. The rich princess from Apocalypse became the crazy religious camp counselor this year. It’s astounding to me that they can fit into all of these different roles.

Predictions I have for the rest of the season

I don’t think for one second that Ms. Booth reopened this camp for the reasons she’s saying. It doesn’t make logical sense that she only wanted to exorcise her demons and provide a safe place for children. I’m willing to bet that she’s sacrificing these people on purpose.

I am totally sure that this current group of counselors is actually at very least the second group that Ms. Booth has hired. I’m willing to bet right now that there’s already a group buried on the property.

As I mentioned earlier, I think that Mr. Jingles has some sort of magical powers to do all the wild killing he’s doing. At least I hope so. Because otherwise, all the shit he’s doing makes no damned sense.

I also predict that this damned camp is under the same sort of weird spell as the murder house in season one. I bet that’s why the counselor from the ’70s is still there. I’m willing

to bet we’ll see a lot more people from that time.

Finally, one bold prediction I have is that by the end of the season, Ms. Booth will have a higher body count than Mr. Jingles. Now, right now the score is 2 to 0, but I’m staying by this one. She’s got death in her soul.

I’ll do a recap at the end of the season with my final thoughts and the followup of my predictions.

What do you think? Do you have any predictions for the season? Do you think mine are totally off base or spot on? Let us know in the comments below.