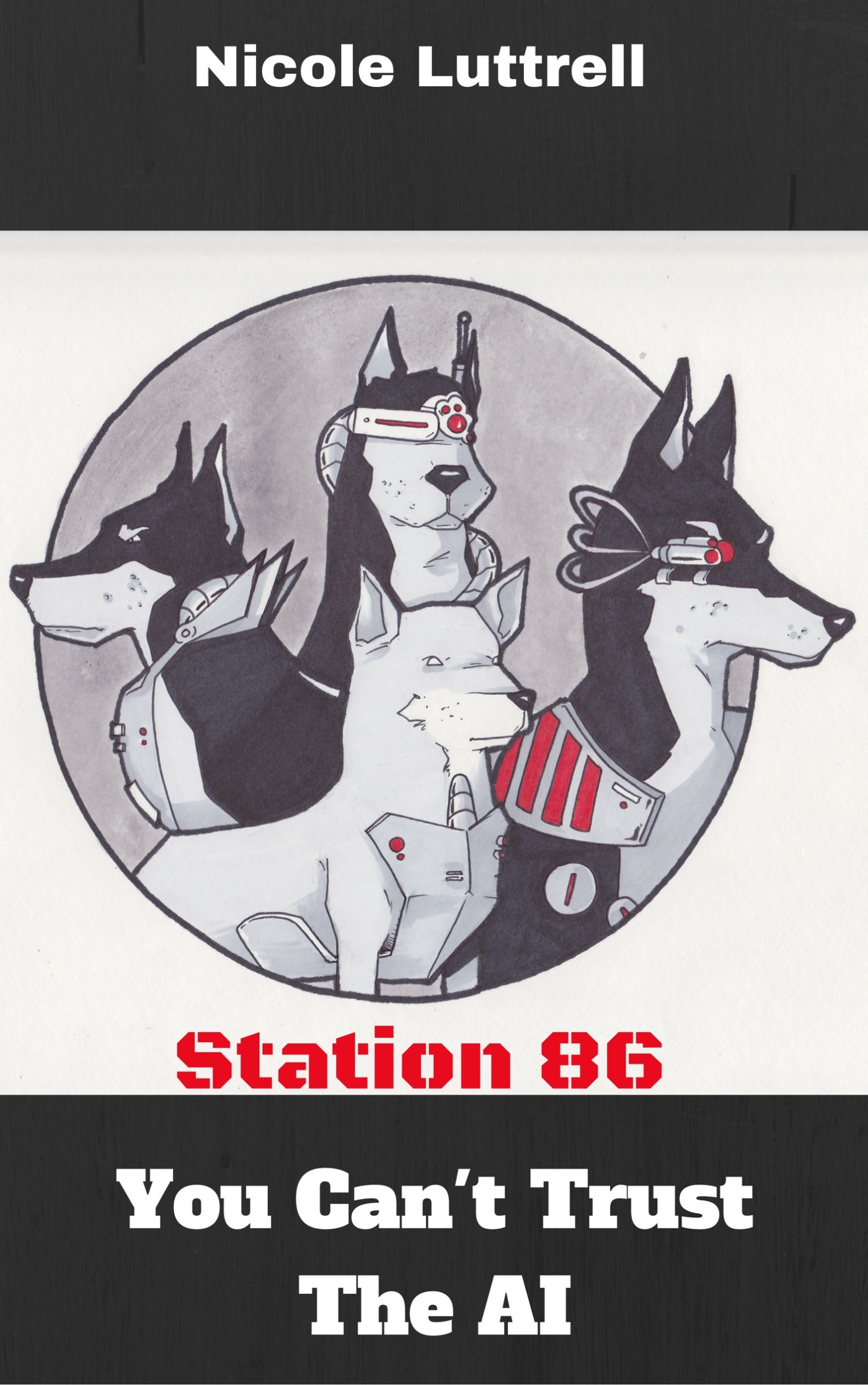 Stay tuned for chapter three tomorrow. Or, you can get the whole book right now. And don’t forget to pre-order Station Central, available now on Smashwords.

Sennett Montgomery sat in the Commissioner’s office, drinking klav and carefully stretching the kinks out of her neck. The transmission beads on the ends of her hair, set in thousands of braids, clicked together gently as she moved. They were the only sound in the room.

Commissioner Bernice Schultz was late for their appointment, and Sennett was grateful for it. Between her increased responsibilities at work and the ordeal of moving into her mother’s house, it was the first peace and quiet she’d gotten in two weeks. Besides, Schultz had inherited a hell of a mess. Sennett wouldn’t have touched the commissioner job for anything.

Of course, her break couldn’t last forever. The office door opened, and Commissioner Schultz came in.

Schultz had been a detective for years, but Sennett didn’t think that she’d ever heard her say more than two words. When she’d first been promoted, Sennett had worried that this quiet, small woman with pale skin and short cropped hair wouldn’t be up to the current clusterfuck that was the station. What she hadn’t reckoned with was Schultz’s sheer energy level. She came into the room looking as though this was the first thing she’d done all day.

“Montgomery,” she said, as Sennett got to her feet, “Good to see you. Sorry, it took me so long to get you in here.”

“It’s fine,” Sennett said, “I guess you haven’t assigned me a partner yet?”

“No,” Schultz said. She sat at her desk and gestured for Sennett to sit as well. “It’s getting done, don’t worry. But there isn’t a senior detective without a partner. We’ll figure something out. In the meantime, I’m sure we can find something for you to do.”

“I’m fine with that,” Sennett said, “I’m still trying to convince myself that this is real. I’ve wanted to be a detective since I was a kid.”

“Well,” Schultz said, “I think we all know that it should have happened sooner than it did. Stone was-,”

Almost without thinking about it, Sennett touched the black band across her detective badge.

“Stone was a murderer and a traitor,” she said, “It’s hard to be angry that she didn’t promote me because of my Khloe husband.”

“Donovan was a good officer,” Schultz said, “We’ll be hard-pressed to replace him. And we owe it to him to make sure that not a single Core member remains on this station.”

“Voit and Stone lived here for years before we found out they were Core,” Sennett said.

“Ah, but we weren’t looking for them,” Schultz said, “We’re smarter now.”

“She’s doing okay. She’s with my brother Mason on campus right now. Mason owes some work to Godfrey Anders, so he’s been finding excuses to stay on campus to avoid him.”

Schultz laughed. Just then, her desk screen went blank. Sennett’s wrist pad, which had been on the screen saver, did the same. “What’s this?” she muttered.

Both screens came back on, showing the IHP logo for a moment. Then it was replaced by an image of an Earthian man. Sennett was sure that she’d never seen him before, but there was something familiar about him.

“This is a message, for every member of-,”

“What the hell is this?” Schultz said, trying to regain control of her screen. “It’s got to be coming from a secure IHP facility, but where?”

“We don’t hear from them in months, then they hijack our whole comm system?” Sennett asked. They both turned to their screens as the rest of the message played.

“An undeclared ship arrived just a little while ago,” Sennett said.

“That’s why he looks so familiar,” Sennett whispered, “Godfrey looks just like him.”

“What was that you said about an undeclared ship?” Schultz asked.

“It’s the same kind of thing we get every day,” Sennett said, “Still, seems weird.”

“Can you go down to Level One and check it out?” Schultz asked.

“Sure, no problem,” Sennett said with a nod.

Level One was always a fantastic mess, no matter the time of day. Shuttles came in from everywhere in every time zone. They carried tourists, visiting dignitaries from other stations and planets as well as relatives coming for visits. Sennett found no exception to this rule when she arrived at Level One. It was a sea of people from every humanoid planet. She saw Khloe people, like Godfrey’s wife and her former husband, with pink or red skin and crystal like hair. She saw Toth people, almost indistinguishable from Earthians until one saw their black eyes and nail beds. The most visible people were the Ma’sheed, who came from a planet with a dark sun that gave off warmth but no light. The Ma’sheed and every other living thing on their planet were bioluminescent.

Officers were calling people away from the docking station, probably on orders from Schultz. Sennett made her way towards them to help and was surprised to see Joy Wheatly and Howard Stoat standing near the barrier that the police were trying in vain to enforce.

“Marshals,” Sennett said, “Maybe you should head back up to Level Two.”

“That’s what I’ve been trying to tell them,” said a haggard looking man standing beside them. He was a heavy man, who seemed to have been strained by the day’s events already. His face was red, his tie was off center.

“Sennett,” Howard said with a grin. “Have you met Leon? He’s our new head of security.”

“And as such, I suggested strongly that Level One might not be a safe environment if an unknown ship is docking,” Leon said.

“Son, you saw that message the same as the rest of us,” Joy said, her eyebrows arched. “If whatever comes off of that ship is dangerous, I don’t want to hear about it second hand.”

“I just hope we’re not explaining it second hand to your successor,” Leon said.

“There’s a ship from Toth trying to come in, let’s have them circle the block,” Howard said into his wrist cuff.

“Which one is the unannounced ship?” Sennett asked. Leon pointed to one a few docking stations away.

The ship was a standard civilian transporter, common for station to station travel. As Sennett watched, the passenger door opened.

A small robotic dog walked out of the ship. It looked like an Earth terrier, with floppy ears, a long snout, and a short tail. Its body was silver and chrome. Sennett expected it to walk in a jerky fashion, but its movements were smooth, as though it was a living animal.

“Hell,” Howard laughed, “we were all worried about a little dog.”

Sennett tapped the two metal dots on her temple to pull up her virtual visor. Information about the dog appeared in front of her eyes. “It’s got artificial intelligence,” she said, “Looks like it’s a model built on Station 88.”

“We’ll need to quarantine it, then,” Joy said, “You know that AI isn’t allowed on this station.”

“That was a simple overreaction to a flu outbreak,” Howard said.

“A simple overreaction that caused twenty-seven deaths,” Joy replied, “Then there was that incident in Russia on Earth.”

“What happened in Russia?” Sennett asked.

“A hospital was using AI nurses to look after newborns. They were killing babies that they didn’t feel were healthy enough,” Joy said.

“There was an investigation into that one,” Howard said, “I still think their government was behind it.”

A row of dogs was coming from the ship. These ones looked more like Dobermans, with larger bodies and sharper looking faces.

“What the hell is going on?” Sennett asked.

The dogs walked to the barrier. They looked around at the guards and citizens. Then, as one, they started doing something that resembled sniffing.

“Let’s clear the civilians out of here,” Joy said. “Everyone, get back, please!”

She snapped her fingers, trying to gain the attention of the people around her. But even those who could hear her didn’t seem inclined to listen. Sennett saw some people lean down to touch the dogs, who didn’t seem to respond to the caresses.

Sennett took Howard by the arm when he reached for one of them. “I think this is about to be a bad situation, sir,” she said.

“Oh, Sennett, you’ve been spending too much time around Foundation members,” Howard said, “This is strange, but I don’t think there’s any reason to panic. They’re just little dogs.”

Then a man started screaming.

One of the dogs jumped, pulling a man to the ground. It was holding him down with its paws, a surgical saw extending from its belly. There were screams from all around the Level as other dogs attacked.

“Get these people out of here!” Sennett cried, pulling Howard back. She drew her weapon, a simple air gun, and started firing. It did nothing.

Leon pulled a steel battalion from his belt, extending it with a flick of his wrist. He pulled Joy behind him and swung at the dog that jumped at him. The dog bounced back, shook itself, and lunged again.

Deciding that she didn’t have another option, Sennett pulled a second weapon, a disrupter, from her back pocket. She started firing at the closest dogs, shutting down their power one by one.

“Do all of the officers have those?” Howard asked.

“No, they’re actually illegal,” Sennett said, “Too dangerous for street use.”

Joy had pulled an electric pistol from her belt. “Seal the transit! Don’t let these things off of this level,” she called, firing at the dogs.

Sennett and Joy fired again and again. But the AI dogs just kept coming, in a steady line from the ship. And the transit was still running.

One thought on “You Can’t Trust The AI, Chapter Two”