My family and I went to DC on a school trip. We visited the National Halocaust Museum. I wasn’t expecting this to be a cheerful trip, but it was an important one.

I’d never stood in front of one of the gas chamber doors. I’d never heard a survivor of the Halocaust speak of his experiences. I’d never seen the room of shoes taken from the prisoners of the concentration camps. Or the two-story room full, floor to ceiling, with pictures of the victims. We walked through the memories of a horror that I don’t have words to describe. We read about Hitler’s rise to power, and the warning signs that anyone should have seen.

The history of the Halocaust is one that we as American’s should never forget. Because here’s something we don’t like to remember.

Our leaders knew what was happening, and they did nothing for far, far too long.

We don’t get all the blame, not by a long shot. But we failed to act, failed to fight against the horror that was happening.

On the bottom floor of the museum, there is a display concerning what’s happening right 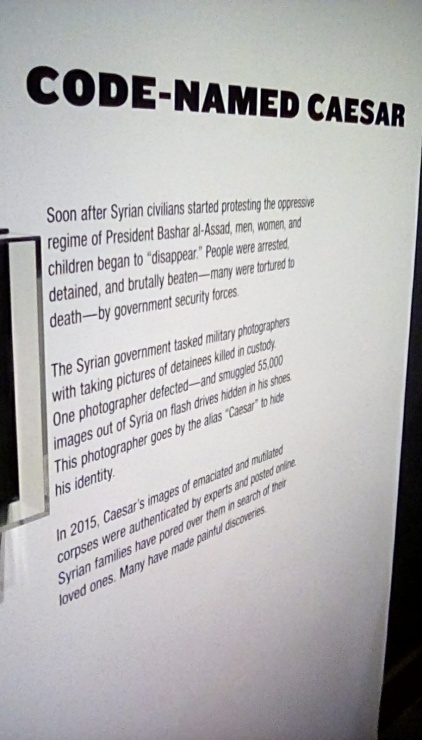 now in Syria. This was where I broke down. The brave actions of a man code-named Cesar have brought unrefutable proof that Syrian leader Basar al-Assad is killing and torturing his people.

His actions are all too familiar.

If you want to help Syria, here’s what you can do. Contact your local representatives and tell them that you support Syrian refugees. Tell them that we don’t want to turn our backs on these people who need our help. And tell them that we should condemn a man who treats his people in this horrific manner.

We should know better. We should be better.