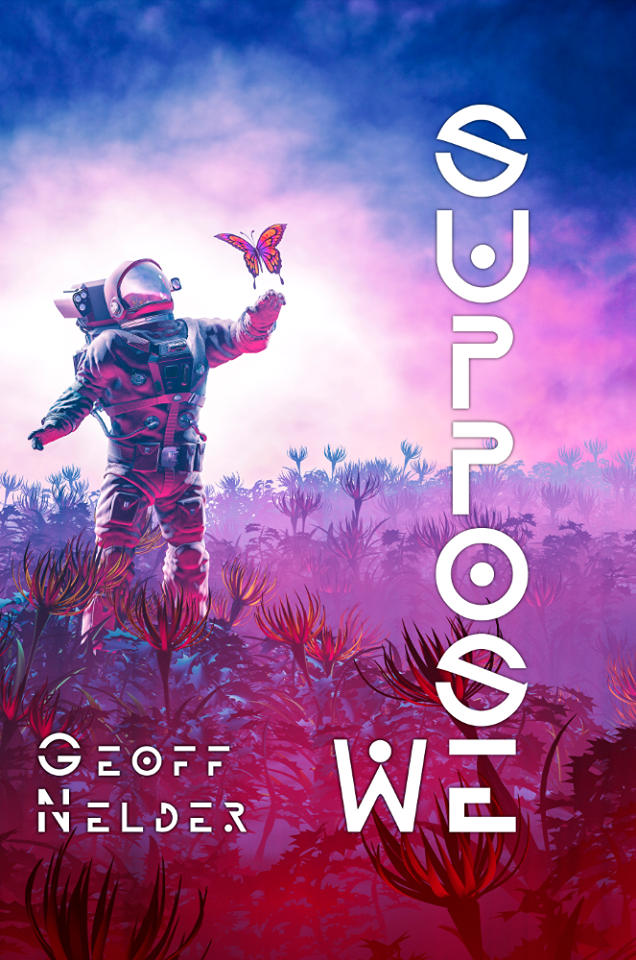 Another thing I haven’t done in a while is to review a book. I don’t know why. I’ve been reading books. But I’ve mostly been reading old books, books that almost everyone has already read except me. (I’ve really been trying not to re-read books. Which actually means no re-reading Harry Potter.)

But, after interviewing Geoff Nelder during the Spring Author Series, I had to pick up his new science fiction novella, Suppose We.

It starts out similar to a lot of other science fiction stories. We have a team of people on a spaceship, seeking another planet for human habitation.

They reach a planet they call Kep. Previous exploration has told them that this planet is considered possibly habitable by humans.

Our cast consists of Gaston, the science officer and main character and the trigger-happy ship’s captain Penn. It’s rounded out with Em and Delta. Together, their mission is to see if humans can survive.

As it turns out, they sort of can. The food is edible, and in fact, is described as familiar and tasty. The air is mostly breathable, though apparently not quite as breathable as on Earth.

The only real issue seems to be that the Kep people, and by people, I mean floating purple cloud-like creatures, don’t really seem to find the humans worth their time.

I honestly could have lived without Gaston, the only Frenchman on the ship, using random French words in every single sentence. But honestly, that’s about the only complaint I have.

I loved the world, though. It’s really unlike most of the science fiction I’ve read. The Kep are not capable of killing, and neither is anything else on the planet. It is completely devoid of predators. (Are you just a little worried about humans on this planet? I am.) But this is so unique! I’d never considered how society might evolve if nothing kills each other.

One of my favorite parts of the book was the AI from the ship, who calls itself Can, as in Suppose We Can. It’s sarcastic but hopeful. It’s constantly working behind the scenes for its crew. And I live it.

I also really love this butterfly that takes a liking to Gaston. It’s just the right amount of whimsical to add some fantasy to a science fiction story.

Another thing I apricated, and it’s something I aspire to, is the detail the science fiction has. The characters are in cryogenic stasis for years, thousands of them, before they reach Kep. When they wake they’re groggy, it takes hours to recoup, and they’ve quite covered in wax required for the process. I love this! I don’t think of things like this.

Suppose We is the first book in a series. I fully intend to pick up the next one when it comes out.

If you want to check out Suppose We, click here. And let me know if you like it.