If there’s one complaint I have about comic books, it’s the sheer lack of continuity. I’m hardly the only fan to have this problem, and I’m sure I won’t be the last.

In a way, I do understand. Comic book characters like Batman, the X-Men and Avengers have been written and rewritten for decades to keep them up to date with modern times. But it can also be confusing as hell! One character has a dozen or so backstories. Nothing’s canon with each other.

But we put up with it as comic book fans, and I’ll tell you why. Because amid all the clutter and chaos we get stories that are true works of art. With so many authors and creators working with these iconic characters, we get some of the worst content (Batman and Robin). But we also get some of the best.

Into The Spiderverse is part of the latter camp.

I know, I’m late to the game with this one, but I have a good reason. I really, really didn’t

think I was going to like this movie. It looked like a mess, to be honest. All these different renditions of Spiderman, a character I’ve never been super fond of to start with, mashed together just seemed like a comedy of errors. Multiple art forms, varying storylines. I wasn’t down for that. Even the inclusion of my favorite actor, Liev Schriber, as the antagonist wasn’t enough to tempt me into it. I mean, he was in My Little Pony too, and I sure as hell am not sitting through that.

It wasn’t going to work unless everyone involved gave a shit about what they were doing. And I mean, they needed to put their heart and soul into this. There could be no half-assed writing, no lazy graphics. It needed to flow because there were a lot of conflicting stories that could flow very, very wrong.

Fortunately, everyone used their whole ass.

Let’s start with character creation. We quickly establish Miles, the main character, as a good kid. A smart kid who has a pretty good life. He’s going to a good school, has a loving family. And his hero, like everyone in his city, is SpiderMan. He’s not a perfect kid. He’s often found out with his uncle spray painting the subway walls. But it’s beautiful art, so it’s hard to be mad at him. You just really like him from the start.

And then he gets bit by a radioactive spider.

One thing I love about Miles is that he has some common sense. He finds out he has superpowers that are just like his hero. And he goes right to said hero to teach him. None of this going it alone nonsense. He knows he needs a teacher, and he tries to find one.

It’s so refreshing to have a teenage main character that isn’t a total idiot.

One reason I think Into The Spiderverse works is that they were ready for people like me. People who are a little tired of all the different versions of characters. So, they decided to poke fun of it. They included characters like Peter Porker, played by the hilarious John Mulaney. They included a Noir Spiderman, who I’d never heard of before. I straight up thought they’d added Rorschach from Watchman when I was watching ads for this movie. They also included a messed up Peter who’s screwed his life to shit.

I think what worked here was that they let each of these characters be separate characters. The Spiderman-bot from Japan was a big scary robot powered by a teenage mechanic. Miles was a funny kid who just wants to do right by people. Peter Porker is, as always, hilarious. The story allowed each to be honest to their character while not overpowering the story. It was in their word usage, their actions. Their artwork and body language told a story. But they never took over from the main storyline.

In addition to blending the different characters well, they also blended the story well. I always think the best stories are the ones that are serious, dark, gritty and funny. There’s a reason I’m such a big fan of Joss Whedon.

I think that’s the way to handle stories like this. As always, I like it because it’s honest. Life is dark, and sometimes there’s no softening that. But life is still funny, even in dark times. At least, I think it is. But I’m usually the one cracking jokes at the funeral. (At least I’m not the one with a couple of cases of beer in the back of the car at the funeral. At least that brave soul decided to share.)

If you want a masterclass in blending styles, watch Into The Spiderverse. Watch how they focus on one main story that ties all the characters together while balancing them so that each one shines.

Preorder Falling From Grace and be entered to win a free autographed copy of Broken Patterns. And, get an instant download of the first four chapters. Just send me a screenshot 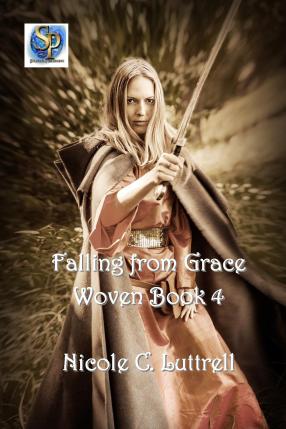 of your preorder recipt to nicolecluttrell86@gmail.com.

One thought on “Why Into The Spiderverse works, even though it shouldn’t”