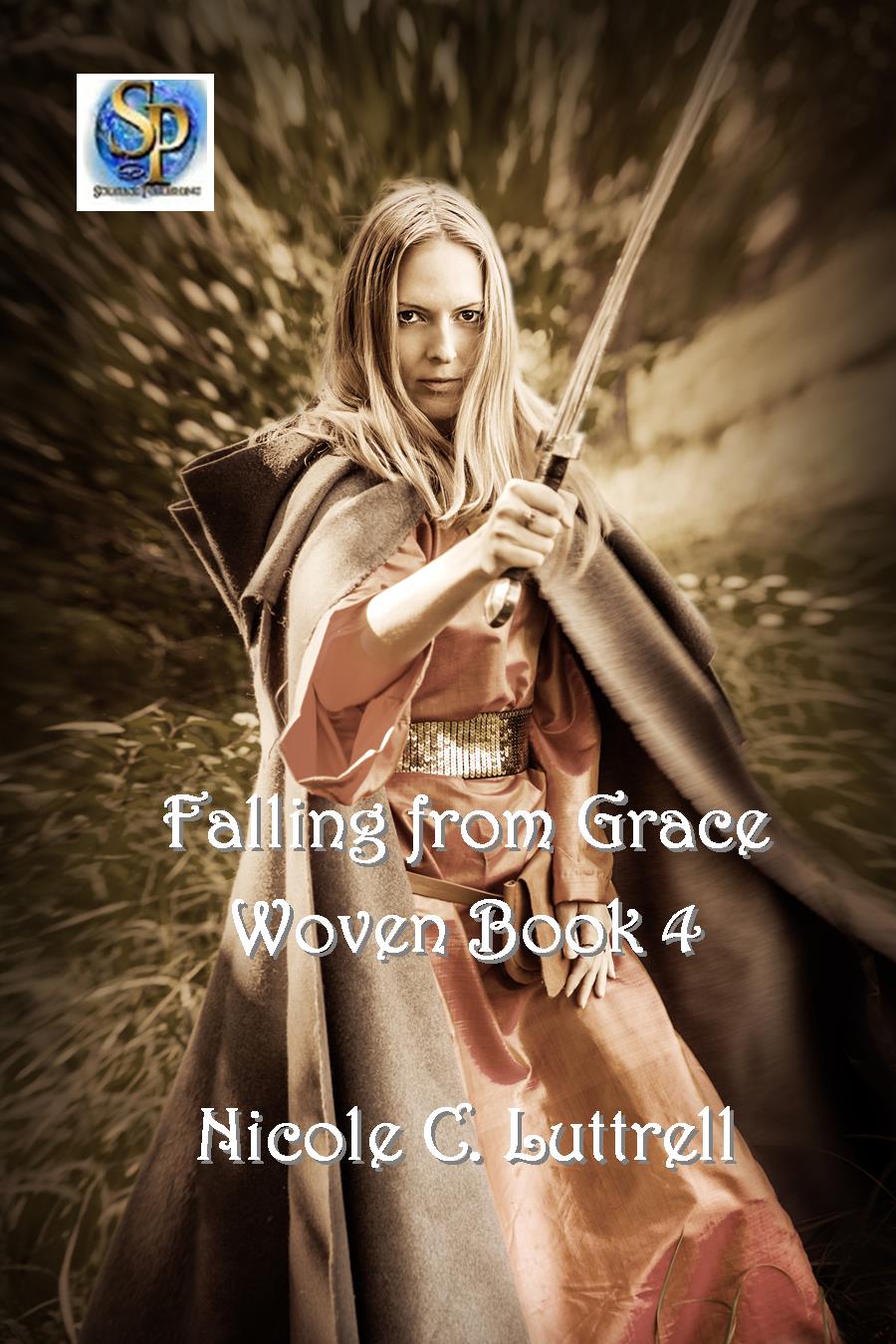 The women of the village had a tradition when the men were off on a raid. They would collect together, anyone whose man was involved, and spend almost all day at the center square. The village had no inn, for who would want to stay there? They had no tavern, because no one had the extra coin to get drinks. There was a meeting hall for the Brotherhood, but the women weren’t allowed in there. So they collected in what they called the square, but was really just a clearing in front of the meeting hall. They set up tables, and brought out chairs. They’d do their washing communally, and share what little supper they could as well. Those with children would bring them, and the women would lend a hand in caring for them.

They collected together because it was easier to work with so many other hands. They collected together also because it was loud. And it was good that it was loud. Grace had never spoken to the other women about the matter, but she was sure they all would agree. When they were surrounded by other women and children, making noise, it was easier to forget that sometimes men didn’t come back from missions.

While that wasn’t likely this time, it was always possible. It was a simple enough raiding mission, taking food collected for the greedy aristocrats to redistribute to those who had actually worked for it. But one could never depend on even a simple mission going to plan.

Grace, now a woman grown, sat in a circle of chairs with a basket of sewing. Her thick, light hair was pulled into a tight knot to keep it from her face. May, now also a woman grown, sat next to her with a larger pile of simple dresses, tunics and breeches, muttering. She had her da’s ice blue eyes, and his height.

“Can you speak up?” Grace asked. “I do not know how you expect anyone to hear you.”

“What is the point if anyone does hear me?” May replied. “June certainly does not care that she has left me with all of the mending. She is off pretending that she will catch some fresh meat for supper. As though she could.”

“Do not fuss at her,” said Nikita, sitting on Grace’s other side. Her belly was swelled with her first child, and she was crocheting a blanket. “At least she took all the bigger boys out to the woods. They might not bring anything back, but at least it got them out of here for a while.” “Sure. It got them running in the woods, shouting and scaring away all the game for the next moon, so the men will not be able to get fresh meat when they return,” May replied.

“Speaking of,” Grace said, as a sound caught her attention. She stood, still holding a shirt in her hand. The other women began to hear it as well. The grind of wheels on the road, the sound of horses. The men had returned.

Women and children stopped what they were doing, eager to greet them. Timur, the leader of the Brotherhood, came from inside the meeting hall. He was an old man with gray hair, but he still walked steadily enough.

“Ah,” he said, seeing the men. “My brothers, you have returned.”

Timur’s sons led the way, driving a wagon full of barrels and sacks. They were calling out to the women and their da, and couldn’t have been in higher spirits. Many of the men were the same, hurrying to set down their burdens and grab up their women and little ones.

Grace watched for Victor, Morgan and Calvin. She knew she shouldn’t have worried. They were three of only a handful of mages in the village, and their magic was powerful. But that didn’t mean something couldn’t happen.

But they were there, walking at the back of the crowd. Victor and Calvin were easy enough to see. Victor’s reddish blond hair was in a tangle around his face. His broad shoulders were slumped. Calvin, taller and broader than his brother, was looking at the ground rather than at the crowd. His son Morgan was thin, and appeared thinner still when compared to the other two. His fine blond hair was pulled back neatly, as it ever was. They came to May and Grace, but there was a dullness in their greetings.

“Gracey,” Victor sighed, and grabbed her up into his arms. He hugged her tight, and she returned the embrace. “I have missed you, my girl.”

“Victor, what is it?” she asked, pulling away. Calvin released May, letting Morgan hug his big sister. He gave Grace a dark look. “Where are Yulia and Yeva?” Grace tensed. “They are likely in this crowd somewhere.” As though she would know where that thieving old woman and her granddaughter were.

“Now is not the time for old angers. We lost Vlas,” Calvin said.

“A guard for the aristocrats took him out as we were leaving the stock house. We must tell them,” Victor said.

May looked quickly at Calvin. “Da, do not say anything stupid to Timur.”

“Do not be telling your Da what to do, girl,” Calvin said, but it was muted. “The fool sent us on this raid knowing damn well the guards would be thick. He should hear this.”

“Yes, but maybe not with screaming in front of the whole village,” Victor said.

Calvin sighed. “I suppose there is some sense in that. Where is June?”

“Out hunting with the bigger boys,” Grace said. “Foolish girl should be here, not distracting the boys in their hunt,” Calvin muttered. “Alright, Vicky, let us go and find Yulia and Yeva.”

Grace let May trail after them. She would have no comfort for Yulia. No sense being there when she found out she’d lost her son.

Timer was with his sons in front of the meeting hall. He cast his hand over the wagon, full of foodstuffs and goods. “Look at all you have brought us!” he called, striding into the middle of the crowd. “These goods will go to villages in need, instead of the bloated coffers of the aristocrats. And that is something well worth celebrating, do you not all think?”

The village cheered, at least most of them did. Yulia and Yeva were listening to Victor and Calvin. Grace saw Yulia stagger, and lean heavily on her granddaughter. Yeva, all of fifteen years old, didn’t look as though she could bear the weight. May helped the older woman to a seat, where she broke down into sobs.

Timur didn’t seem to notice. “I want to thank each and every man who brought this bounty back to us. Together, we brothers will do what the aristocrats will not. We will feed our people. We will clothe them. We will bring our country back from the brink of darkness. And someday, no more children will starve.”

“I wish he would shut up,” Morgan said, eyeing his da. Grace had to agree. Calvin was still standing over the sobbing Yulia, but his eyes were on Timur. His raging eyes. His hands were starting to glow blue, he was losing control of his magic.

“Brothers, we have fought a long and hard battle against the aristocrats. We have been ground down. Look at this, look at what they had kept in their store houses, stolen right out of the hands of the people. They leave us to starve, but we say no more! We will defeat them!”

Calvin turned, as though he would march up to Timur and tell him just what he thought. But May put a hand on his shoulder, stopping him.

She didn’t think to stop Victor, though. “When?” Victor called. The crowd hushed, and turned to see who had spoken. Timur, still all grins, said, “What was that, Brother Victor?” “I asked you when would we stop the aristocrats. Because these little raids are not doing anything.”

“I would not call this mountain of goods a little raid,” Timur said.

“I sure as hell would,” Victor replied. “Especially when you consider what we lost to get it. Or did you not even notice that we came back here a man short?”

Grace darted through the crowds to get to Victor, to shut him up. But it was far too late for that.

“Stand back, young wolf,” Timur said. “Your passion is admirable, but you are aiming it at the wrong man.”

“You think so?” Calvin called. Apparently May wasn’t able to keep him silent any longer. “All we do, all we have ever done is raid! We are the Brotherhood of the Broken Chain, and we act like a pack of thieves! Why are we not attacking the aristocrats? King Kurtis is old and mad, surely he could not stand against us.”

“I will not send men to die attacking the capital, Calvin,” Timur said. “Not even your magic light balls are going to take that castle down.”

“Maybe they would, if you were not too much of a coward to let me go find out,” Calvin snapped.

The entire village froze. They looked from Timur to Calvin, with Victor standing at his back. They waited.

“What did you just say to me?” Timur asked. “We all know you heard me,” Calvin snapped. “So how long will you treat us like a thieving crew, eh?” Timur’s eyes narrowed. He looked like he was trying to work out a puzzle. Grace waited. She felt like a deer who knows a hunter has her in his sights. “You, you young men might have a point,” Timur said. He nodded, looking them over. “Yes, I think you just might. I am older, of course. I have spent my life making sure our people were fed and safe. But maybe that is not enough anymore.”

Timur walked calmly up to Calvin, and put a hand on his shoulder. “You have such fire, such promise, young wolf. How about we see how far you can take that?”