My book, Falling From Grace, is coming out soon! Have I mentioned it nearly enough? I don’t think so.

As it turns out, I’m not the only author with a book coming out. (Shocker.) And as I was going through my Amazon pre-order list, I realized that some pretty freaking fantastic fantasy and science fiction books will be launching this year. So I guess I’d better get that pile of to read’s down before they come out.

All but one of these books is available for presale now. So if you needed something to look forward to while the COVID-19 reaper stalks us, here you are.

By Tamora Pierce- No release date yet

The only reason this book is so far down on this list is that it doesn’t have a release day yet. It’s the only one on the list that doesn’t. But I have been waiting for it since the moment I read the last page of the book that came before it, Tempest and Slaughter. (And I was waiting for quite a while for that one.)

This trilogy is about Numair, the husband of Daine from the Wild Mage series. It was discussed in Emperor Mage that Numair’s history was colorful, to say the least. And I can’t wait to find out all of it. 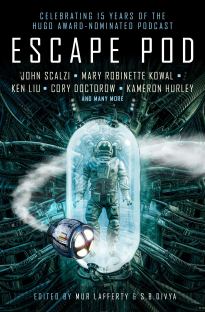 Okay, so not only is Mur Lafferty editing this anthology, Mary Robinette Kowal is included. Then there’s the fact that I love anthologies to start with, so this book is a big win for me. And I don’t even have my hands on it yet.

Or Matt F’ing Wallace if you listen to Ditch Diggers.

I’ll be totally honest with you, I have two reasons for wanting to read this; Wallace is a great podcaster and I’ve never read a book by a former wrestler that I didn’t love. (Full disclosure, the only other wrestler turned author I’ve ever read is Mic Foley. But I loved his book.)

At any rate, Savage Legion is the first of a new series. And I’m quite excited to read it.

I need to read this whole series before I get to this one. But everything of Sanderson’s that I’ve read so far has been awesome. So I’m sure I’ll get through all of it eventually. And maybe even in time for this one to come out.

My darling husband read An Absolutely Remarkable thing, went nuts about it, and insisted that I read it. I read it and started looking for information about the sequel. It was just announced.

If you haven’t read book one, do yourself a favor and read it right now. It’s nothing like any other book I’ve ever read. It’s about a collection of big metal statues that just show up in the middle of the night with no explanation. Hilarity, panic and the worst/best of humanity ensues.

I am counting the days until this book comes out. There are too many.

Ballad of Songbirds and Snakes

By Suzanne Collins- Release date May 19

At least one person I’ve told about this release stopped our whole conversation to pre-order it right then. I don’t blame her, as that’s exactly what I did as soon as I heard it was coming out.

I, like almost everyone else on the planet, devoured Hunger Games. I watched every movie, learned how to whistle, and know every word of Hanging Tree by heart. (By the way, if you’re looking for a song to sing to time your handwashing, one verse of Hanging Tree is exactly 20 seconds long.)

The thought of a prequel series is beyond exciting.

So, what do you think? What’s exciting on your pre-order list right now?